From understanding to action
Catalyzing real and lasting change

At the Ford School, brilliant researchers and prominent alumni are seeking and finding actionable policy solutions. But knowing what could make a difference is not enough.

Cutting through the noise

Our vision is to move from understanding to action--not an easy task in a noisy world, a world where innovative solutions are too often thwarted by partisanship, spin, and gridlock. Our publications highlight the research findings and policy impact of our students, faculty, and alumni.

We welcome story ideas and feedback from alumni and friends of the school. Email fspp-editor@umich.edu. Not receiving State & Hill? Join our mailing list.

Download the latest State & Hill as an Adobe PDF

The Ford School's Policy Points video series features short segments on current events or recent research by the school's distinguished faculty. We encourage opinion leaders to use material from these videos or transcripts in decision-making, research, or media-related activities. Policy Points are produced in partnership with the University of Michigan News Service. 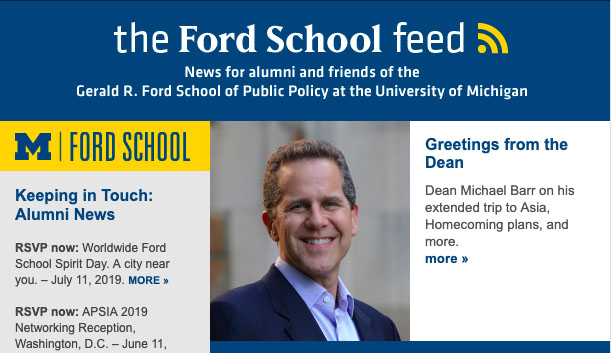 The feed (noun): 1) Distribution of a local broadcast by network or satellite to a larger audience. 2) A data format used to provide frequently updated content. 3) Email communications from the Ford School used to link our alumni and friends around the world to news and information about our community. The Ford School feed, an electronic news source, is sent to students, faculty, staff, alumni and friends three times per year. Not an alum, but want to get 'the feed?' Email us at the-feed@umich.edu. Are you an alum who didn’t receive the last edition of 'the feed?' Update your contact information today.

In addition to the school-wide publications listed above, the Ford School's active research centers produce and distribute dozens of publications annually. These policy briefs, reports, and newsletters bring the expertise of the Ford School's faculty, research centers, and their affiliates to bear on today's policy challenges--delivering insights, findings, and recommendations from the school's leading academic researchers. Publications address a wide variety of policy challenges in energy and environment, state and local governance, poverty and inequality, education, and more.

Summer 2019 update from the Alumni Board
As your elected Alumni Board chair, I want to provide an update to you on what we learned, accomplished, and discussed during our Spring meeting.
Read the full story

A ‘dream job’ for alum Mark Wallace
Mark Wallace
MPP '04
Since Wallace took the job five years ago, he has continued the conservancy’s practice of “radical transparency,” inviting the public to observe and give feedback on everything from planning sessions to design firm interviews.
Read the full story

The Ford School is #1 in policy analysis and #1 in social policy
The Gerald R. Ford School of Public Policy at the University of Michigan is nationally recognized again as one of the top graduate programs in public affairs, according to the latest U.S. News & World Report rankings.
Read the full story

Ryan Etzcorn talks about his Fulbright experience
Ryan Etzcorn
MPP '16
"It is a fully liberated mandate to be curious that I will cherish for the rest of my life.”
Read the full story

In memoriam: Eunice Burns (MPA '70)
At the Ford School, Burns’ legacy will continue far into the future through the Eunice Burns Fund for Water Policy Education, which supports educational and research activities related to water and environmental policy and sustainability.
Read the full story

An IPPStory: 1969, the dawn of public policy
Pat Crecine
Founding director, IPPS
It was [Pat] Crecine who convinced Roe, and many others, to study public policy as the nascent program was launched in the fall of 1969...
Read the full story

END_OF_DOCUMENT_TOKEN_TO_BE_REPLACED

Elizabeth Anderson: Shareholder Capitalism and the Capital Share of Income

Bachelor of Arts in Public Policy (BA) at the Ford School