The Ford School at the University of Michigan is a top-ranked public policy school dedicated to the public good. The school inspires and prepares diverse leaders grounded in service, conducts transformational research, and collaborates on evidence-based policymaking to take on our communities’ and our world’s most pressing challenges.

The Ford School offers master's degrees in public policy and public affairs; joint PhDs in public policy with economics, sociology, and political science; an undergraduate degree and minor studies; and a graduate certificate in science and technology policy. With its origins in the very first program of public administration established in 1914, the school was named for President Gerald R. Ford, a University of Michigan alumnus, in 1999.

The Ford School is ranked #1 in social policy and #3 in policy analysis, according to the U.S. News and World Report.

Students across our BA major and minor, MPP, MPA, and joint PhD programs

The Ford School received the Association of Professional Schools of International Affairs' 2021 Innovation Award for Professional Development Programming, which celebrates new or innovative programming that helped graduate students develop professionally in the fields of international affairs. In 2020, the school was recognized with the Network of Schools of Public Policy, Affairs, and Administration's (NASPAA) Social Equity Award, which honors a public policy, affairs, or administration program that exemplifies the highest standards in social equity through outstanding contributions in research, teaching, and service.

Ford School faculty are recognized and celebrated by people and organizations around the world. More faculty awards.

A powerful and growing network of professionals engaged in public service and leadership around the world.

The operating budget of the Ford School for fiscal year 2023 is $23.7M. This includes funding from tuition and fees, but also University allocations, overhead return from grants, expendable gifts, and proceeds from investment income. The school's active faculty research program generates significant resources, including $3.7M in research expenditures in FY2022. Our $87.5M endowment (market value as of 6/30/22) provides annual funding to support student scholarships, fellowships, and engagement activities; faculty research and policy engagement; and programmatic outreach activities such as our active lecture series, policy briefs, and more.

In December 2018, the University of Michigan closed out its successful Victors for Michigan Campaign. The Campaign's philanthropic priorities were for student support, engaged learning, and bold ideas, along with other presidential initiatives such as poverty solutions and precision health. During the campaign, the Ford School's generous alumni and friends gave over $47M to support Ford School students, faculty, and research and programs.

The Ford School is an active participant in the U-M Planet Blue energy conservation program, the Sustainable Computing Initiative, and a variety of waste reduction and recycling activities. Also, Weill Hall energy use is tracked monthly by plant operations. The school also has a committee dedicated to engaging the community in conversations about sustainability and working toward environmental and energy leadership. More information about University-wide efforts can be found on the Office of Campus Sustainability website.

In 1913, reflecting Progressive Era frustrations with government inefficiency and corruption, Jesse S. Reeves, a nationally recognized scholar and chair of the University of Michigan's political science department, proposed America's first master's degree in public administration. While Reeves was primarily focused on international law (in 1930, he would serve as technical advisor at the League of Nations Hague Conference) he believed "that the University ha[d] a distinct opportunity, not only in offering a public service to the people of the state...but in leading the way in the training of municipal experts." In 1914, the University of Michigan approved Reeves' plan, inviting students to apply to its newly launched graduate program in municipal administration.*

In the mid-1960s, advanced analytic methods from the social sciences began to be applied to the understanding of public concerns, launching a comprehensive review of the University's public administration curriculum by an interdisciplinary advisory council. In 1968, the curriculum was refocused to provide students with an analytic toolkit and cutting-edge problem-solving methodologies. The longstanding public administration program gave way to the Institute of Public Policy Studies (IPPS), the nation's first public policy degree program. The pioneering interdisciplinary social science core emphasized economic and statistical analysis, an understanding of the political environment of policy, and the importance of organizations to successful implementation.

Recognizing the value of research and education in public policy and the academic excellence of its program, the University of Michigan established the School of Public Policy (SPP) in 1995.

In 1999, the school was named in honor of Gerald R. Ford, the 38th President of the United States and a 1935 graduate of the University of Michigan. For a more thorough history of the Ford School, view our interactive historical timeline. 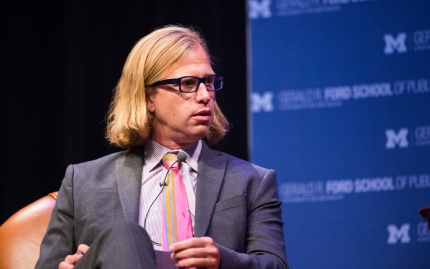 Read more about "Wolfers challenges us to reimagine the social contract" 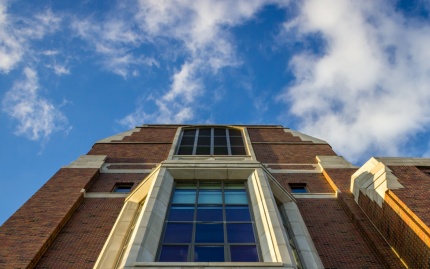 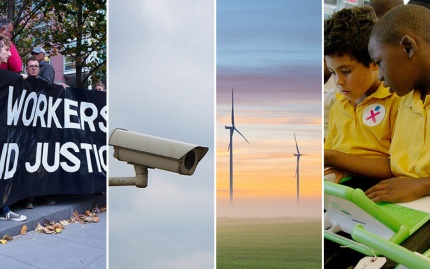 All written copy on this page is licensed under the Creative Commons Attribution-Sharealike 3.0 Unported License (CC-BY-SA) and the GNU Free Documentation License (GFDL).