The Ford School is so proud of the Classes of 2022—a resilient, talented group who earned their University of Michigan degrees in a time of historic challenges. This year’s graduates supported each other along the way, and they did more than just persevere: they continued to lead and create positive change in their communities and their school.

We're excited to celebrate the Classes of 2022 through our in-person Commencement and reception, as well as virtual tributes, including opportunities for families and friends to come together, meet our faculty and staff, and congratulate their graduates. 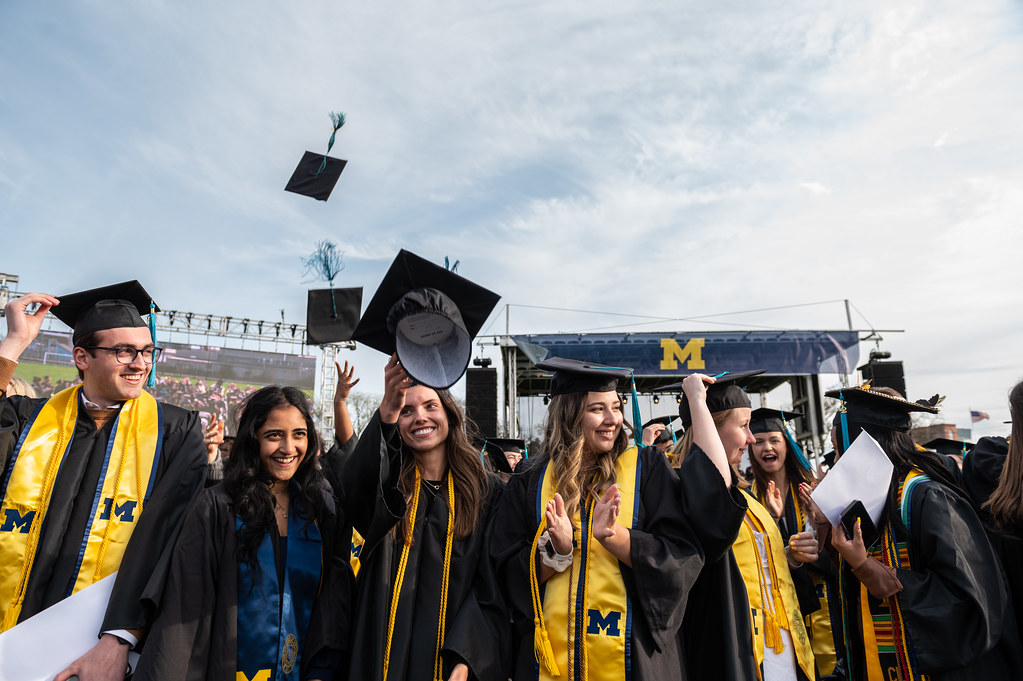 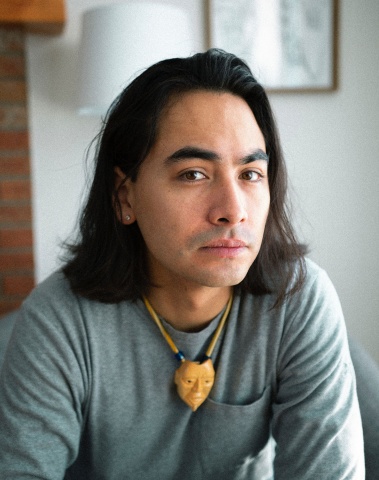 Charge to the classes of 2022
Julian Brave NoiseCat, a member of the Canim Lake Band Tsq’escen and a descendant of the Lil’Wat Nation of Mount Currie, is a writer and filmmaker currently based in the Pacific Northwest. A fellow of New America and the Type Media Center, his first book, We Survived the Night, will be published by Alfred A. Knopf. He is concurrently co-directing his first documentary, which follows the search for unmarked graves at the residential school his family was sent to in Williams Lake, British Columbia. NoiseCat's work has been recognized with numerous awards including the 2022 American Mosaic Journalism Prize, one of the largest cash prizes in journalism, which honors "excellence in long-form, narrative or deep reporting on stories about underrepresented and/or misrepresented groups in the present American landscape." In 2021, he was named to the TIME100 Next list of emerging leaders alongside the starting point guard of his fantasy basketball team, Luka Doncic. 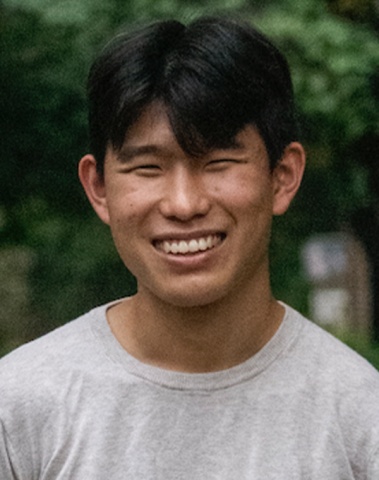 Elected undergraduate speaker
Gerald Sill is a member of the 2022 BA cohort with a focus area in social policy and inequality, and a minor in urban studies. During his time at Michigan, Gerald has been active on campus serving as the managing podcast editor at The Michigan Daily, the internal professional development chair of the pre-law fraternity Beta Alpha Rho, and treasurer of Students of Color in Public Policy. He is a research assistant in the Organizational Studies department working on a project studying minority students’ experiences at elite colleges. Gerald has interned with Media Matters for America, the Washtenaw County Public Defender's Office, and the General Services Administration. Following graduation, he will be moving to Seattle to join Mercer as a career consulting analyst. 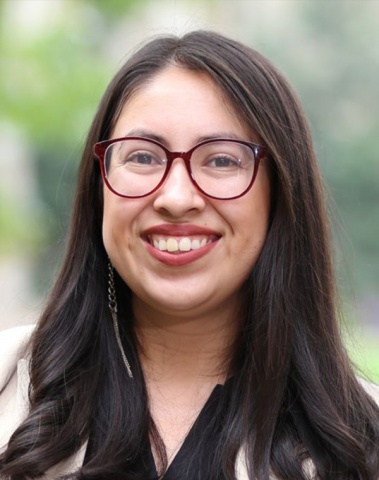 Elected graduate speaker
Crystal Olalde-Garcia was born and raised in Watsonville, California, a predominately Latinx agriculture community on the central coast. She obtained her bachelor’s degree in political science from Rice University in 2015. Crystal worked for 5 years in education as a teacher, operations coordinator, and recruiter across 3 different states. As a first-generation student, she experienced first-hand the power of education and pursued an MPP to learn about ways to address inequities. At Ford, Crystal focused on social policy, served as chair of the Student Affairs Committee, and was a Rackham Merit Award Fellow. After graduation, she will be moving to Texas with her soon-to-be husband and is excited to continue her career.

Join us at the Ford School graduation reception following the ceremony

Graduates, family, and friends are warmly invited to gather for light refreshments at Weill Hall from 6:30 - 7:30 p.m. following the Ford School Commencement.

Fresh swag for Fordies and families

Orders placed for Ford School swag through our online pop-up store with Underground Printing in April and May will ship directly from UGP on May 23. 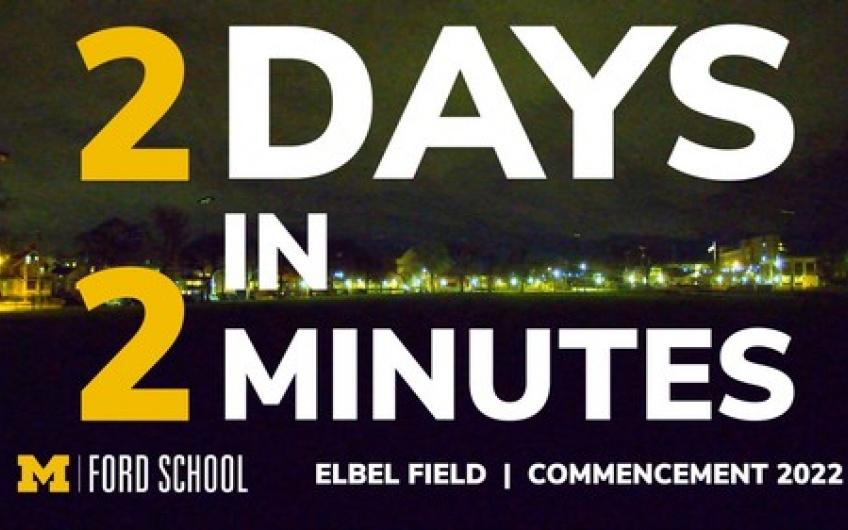 Stay engaged
Welcome new alumni!
Stay engaged as an alum! You are always part of our family, and as a new alum, we know you’ll remain connected with the Ford School community.

There are many different ways to stay engaged

And don't forget, as a new grad, the U-M Alumni Association also welcomes you to a family of 600,000+ fellow Wolverines. Check out their website for information on accessing alumni community career resources and networking opportunities.

Fordies, friends, and family: Bring the festivities to your social media feeds and more! Download these custom graphics to mark the moment, congratulate your grad, and do a graduation trivia IG Story. Most of all, celebrate this achievement. You've earned it. Use #FordSchool22 and tag @FordSchool on Facebook, Twitter, and Instagram.
Get digital swag 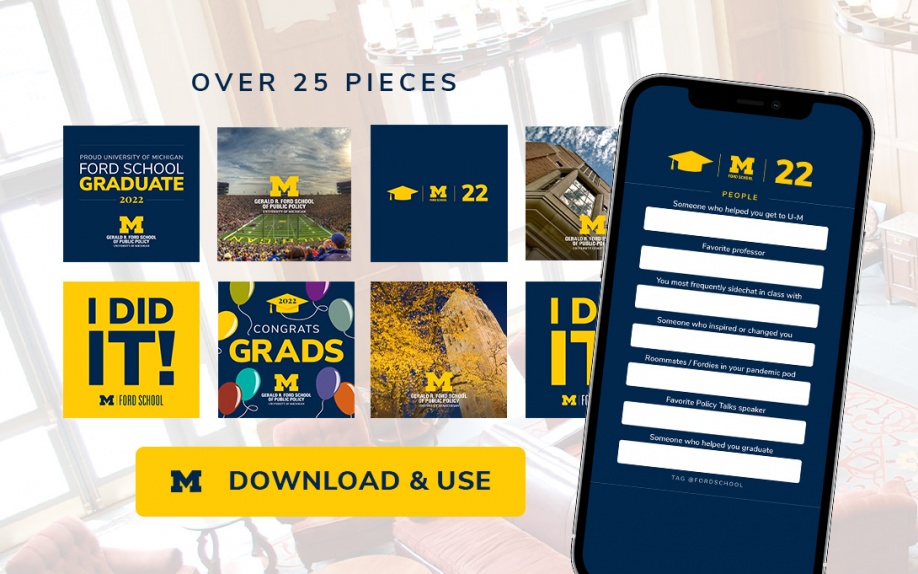 ... there is no way we can go forward except together and no way anybody can win except by serving the people's urgent needs. We cannot stand still or slip backwards. We must go forward now together.