On November 12, 2004, alumni, friends and donors attended the ceremonial groundbreaking for the new home of the Gerald R. Ford School of Public Policy, Joan and Sanford Weill Hall (see photo). Construction of the $34 million building is now officially underway – and the promise of a magnificent academic facility is literally coming to life. Over 450 guests attended the groundbreaking, including Ford school alumni from as far back as the Class of 1953, current students, President and Mrs. Ford and their four children, Joan and Sanford Weill, U-M leaders, and friends of the Ford School. In welcoming remarks, U-M President Mary Sue Coleman recognized the generous contribution of Joan and Sanford Weill and the many other donors who have made this project possible. President Coleman spoke of President Ford's legacy during his 73 year relationship with the University, which represents almost half of the entire history of the institution. On behalf of the U-M Board of Regents, Rebecca McGowan described how one of American's foremost architects, Robert A.M. Stern & Associates, has brought together the power of the Ford legacy and the potential of the Ford School into a building design worthy of the excellence and growing presence of the University's public policy program. 'For nine decades, space has been our final frontier as we moved through the University in search of a place to call our own,' said Dean Rebecca Blank as she began to share the history of the Ford School with vintage photos and nostalgic, audience pleasing anecdotes. Dean Blank described the significance of Weill Hall, 'In our new home, we will have the space and technology to bring the world to the Ford School, and the Ford School to the world.' A standing ovation honored President Ford as he addressed the audience with the mixture of gratitude, school spirit, and humor that characterized the day. 'When I came to the university in 1931, I brought a $100 check for the cost of tuition. I never would have thought that when I put that $100 down, I would be here today for an event such as this.' Ford went on to thank the Weill's for their friendship and generosity. During the luncheon that followed, President Ford was the first to stand and cheer as the Michigan Fanfare Band made a surprise appearance at the luncheon and began to play Hail to the Victors. 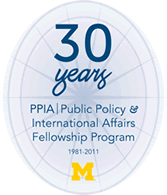