ISIS has gained increasing media attention and alarmed world leaders since June 2014 when it seized control of large swaths of territory in northeastern Syria and western Iraq, including Iraq's second largest city Mosul, and declared the establishment of an Islamic caliphate. But this Islamist extremist group (also known as ISIL and Islamic State) has been growing in strength and popularity for several years, and the roots of its grievances are centuries old.

As the leading campus resource of global affairs, the International Institute has established the II round table series as a vehicle to promote informed discussions on contemporary issues and events that affect our world.

This II Round Table, co-sponsored by the International Policy Center, and the Center for Middle Eastern and North African Studies (CMENAS), brings together four experts to shed light on different aspects of ISIS: its origins, ideology, popular support, and impact on the international system.

"ISIS in the Western Order: How Does it ‘Fit’ and What are the Challenges?" -  James Morrow Research Professor, Center for Political Studies; University of Michigan

Sign up for information about news and events from the Ford School.
4:00-5:30 pm 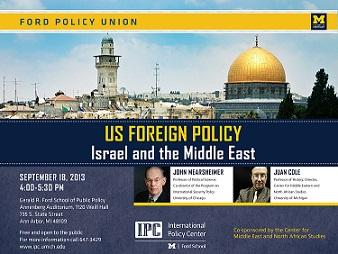