Co-sponsored by: International Policy Center, Weiser Center for Emerging Democracies, and the Center for Russian, East European, and Eurasian Studies

On March 18 of this year Vladimir Putin will likely win easy re-election to a 4th term as Russian president.  But expectation is growing in Russia that this will be his last term as President, opening a Pandora’s box of uncertainty and competing succession scenarios with broad consequences for Russia’s internal direction, and external ambitions.

John R. Beyrle served as an American diplomat for three decades in a career focused on the Soviet Union and Russia, and Central and Eastern Europe. He was twice appointed ambassador: to Bulgaria (2005-08), and to Russia (2008-12). During the latter assignment, he helped foster improved U.S.-Russian relations, highlighted by the signing of the New START nuclear arms reduction treaty.

Ambassador Beyrle’s diplomatic service included two earlier tours at the U.S. Embassy in Moscow, including as Deputy Chief of Mission. He served as counselor for political and economic affairs at the U.S. Embassy in the Czech Republic, and a member of the U.S. delegation to the CFE arms control negotiations in Vienna. His Washington assignments included special advisor to Secretary of State Colin Powell for the New Independent States, and director responsible for Russian policy on the staff of the National Security Council under President Clinton.

Ambassador Beyrle received a B.A. with honors from Grand Valley State University (1975) and an M.S. as a Distinguished Graduate of the National War College (1996), where he later taught as a visiting professor of national security studies. He speaks Bulgarian, Czech, French, German and Russian. 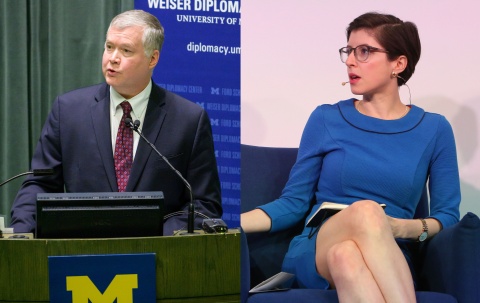