Los Angeles-based David Bohnett is the founder and managing member of the early stage technology fund, Baroda Ventures. In 1994, he founded GeoCities.com, one of the original Internet success stories. He is chairman of the board of the Los Angeles Philharmonic Association and a trustee of amfAR, The American Foundation for AIDS Research, and of the Los Angeles County Museum of Art. The David Bohnett Foundation funds a wide variety of innovative programs in major cities across the U.S. At the Ford School, the Foundation supports a prestigious, competitive fellowship that provides two years of tuition support and a paid summer internship in the City of Detroit's mayor's office.

The Bohnett Fellowship provides well-trained interns to mayoral offices in several cities and fosters a commitment among policy graduates to work in cities. Why are urban policy issues important?

In ancient Rome, proclamations were addressed to the city and the world, "Urbi et Orbi." That is our Foundation's lens for social justice: to test programs in the city—the living, breathing, experimental hub of humanity—and then to bring those successes to the rest of the world. The issues that face our cities—from lack of educational and civic engagement opportunities to economic and social roadblocks—are the same issues that face all people, just on a larger scale. The Bohnett Mayoral Fellows and the countless others that they inspire through their work help solve some of the largest issues facing Detroit and Los Angeles and New York, and we hope those successes will be replicated in small towns and communities not just here in the U.S., but around the world.

First, I went to school here at Michigan to pursue my MBA—so I know the power and prestige of this university. And I know that when Mayor Bing and others in city hall learned that they could have, at no cost to them, graduate students who were passionate about solving some of the greatest public policy challenges Detroit faces, he and his team were more than enthusiastic about having those fellows from the Ford School among the senior ranks of their administration. The same is true in New York and Los Angeles. Mayor Bloomberg and Mayor Villaraigosa have told me that without these fellows, key policy research would never get done.

What is even more heartening to me is that the fellows who have graduated have all stayed in public service after school. Rather than run from the challenges our cities face, these fellows have embraced them. That, to me, is a true mark of how successful this program has become.

Your professional career and your foundation's approach to philanthropy are known as entrepreneurial and unafraid of risk. What role does entrepreneurship have in policymaking?

Every elected and appointed leader I meet these days is an entrepreneur. They have to be. They are being asked to do more than ever—with fewer resources. Their ability to succeed—and by that I mean to deliver the goods and services of government to their constituents—demands that they be leaner, wiser, more experimental, and more willing to take calculated risks. "We've always done it that way" is no longer acceptable, and any official who says it is probably won't have their job for very long.

Technology continues to shrink the world. What opportunities and challenges does our increasing interconnectedness present for policymakers?

The opportunities are endless. If a policy solution is working across the state—or around the globe—you know about it. In real time. No longer do we have to wait years or decades to learn why something works or doesn't. The challenge is how to take in that information and then make it work for you and your constituents. In a recent debate I heard someone say that Apple changes its product line every nine months—but it takes two decades for the defense department to do the same thing. That kind of message resonates with the public—they know how fast the world is moving. They see how technology has the ability to change how we live and work and communicate. In addition, they increasingly demand that government move at that same rate; making that a reality is an enormous challenge for policymakers.

You're an influential advocate for and analyst of LGBT civil rights issues. Where do you see that set of policy issues headed next?

Much like your question about the speed of technology, the speed of progress for the LGBT community here and around the world is astounding. I know that it's easy to doubt that: when we suffer a loss at the ballot box on issues such as equality in adoption or marriage it's easy to feel that we're on the losing side of history. But when you really look at our victories at the federal, state, and local levels—from the great marriage win in New York to a record number of LGBT people serving in this current administration—I feel very confident that the volume and pace of our victories is only increasing.

Is there a particular campus spot you're sure to visit when you return to Ann Arbor?

I really enjoy walking around Michigan's wonderful campus and the town of Ann Arbor—so many fond memories come back from my time here. The Spectrum Center in the Michigan Union is a favorite destination, as I worked there while in graduate school and had the good fortune to learn from and get to know Jim Toy, the center's co-founder. 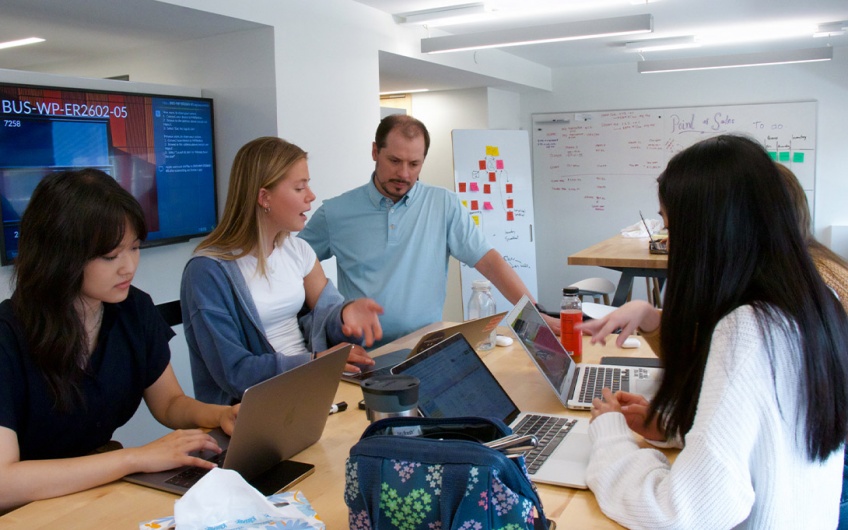