Ensuring voters are well informed about candidates’ backgrounds is a hot topic of late, and in India that focus is on past criminality. There, upwards of nine percent of legislators have faced criminal charges, numbing people to the potential ramifications. To see what effect providing information to voters would have on this trend, Yusuf Neggers and his co-authors conducted a study in Uttar Pradesh during their 2017 elections. On May 19, 2019, Neggers talked about his study on the podcast VoxDev Talks with Tim Phillips. Since its release, the podcast was also published on Ideas for India.

In Uttar Pradesh, Neggers cites, “about a quarter of elected officials are facing serious criminal charges and about 50 percent are facing charges of any kind, and there has been growth over time.” While he did reference compelling reasons why some populations may intentionally vote for candidates in spite of (or perhaps because of) their criminal background, Neggers says that the main reason comes down to lack of information. “We might think that these information constraints are particularly important in rural areas,” Neggers states, “where you have lower literacy rates and probably lower penetration from radio, television, newspapers, that might otherwise provide information.” A recent related study shows that voters in Uttar Pradesh have an aversion to candidate criminality.

The experiment relied on mobile phone access to disseminate text and voice messages containing candidate information to voters. Uttar Pradesh, which has a large rural and poor population, also has “some of the largest mobile phone penetration among rural areas across India.” The experimenters wanted to “try to see using a randomized control trial whether that leads to downstream impacts on the vote shares received by candidates...and if you actually see differences in overall turnout.” These messages were sent out to approximately half a million mobile phone subscribers across Uttar Pradesh in 2017.

The experimenters had support from the government, which has had particular interest in the issue since an Indian Supreme Court case ruled that candidates must report criminal charges. The study focused on the reported number of charges and their type for each of the major party candidates, seeing as they won over 90 percent of seats. Neggers cites economic arguments for such research as well, stating that “while there’s moral aversion to having politicians with serious criminal charges in office, it does seem that there’s at least some economic rationale.”

Listen to the full interview here.

Yusuf Neggers is an assistant professor of public policy at the Ford School. His research examines questions at the intersection of development economics and political economy, with a focus on state capacity and the delivery of public services. Most recently, he served as a postdoctoral fellow in international and public affairs at Brown University's Watson Institute. Neggers earned his BA in mathematical economic analysis from Rice University, his MSc in international political economy from the London School of Economics, and his PhD in public policy from Harvard University. 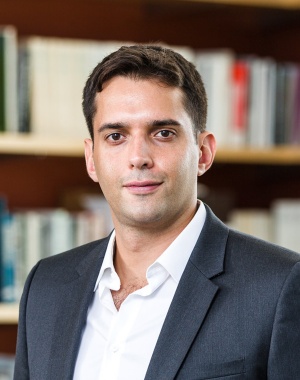 Assistant Professor of Public Policy
Neggers's research examines questions at the intersection of development economics and political economy, with a focus on state capacity and the delivery of public services. He has studied the effects of caste and ethnicity on election processes in India.
Share: