At a time when the U.S. economy is facing the highest inflation in 40 years, two former Ford School deans have a vote on the 12-person committee in charge of steering U.S. monetary policy. Michael Barr will have a vote on the Federal Open Market Committee (FOMC) for the duration of his 10-year term on the Board of Governors of the Federal Reserve. Susan Collins, the Boston Fed president, currently holds one of four rotating seats on the FOMC.

Two of twelve votes is striking! But the history of strong connections between the Ford School and the central bank of the United States goes back decades, with linkages at many levels, involving both faculty and alumni.

Collins and Barr are not the first Ford School deans to be members of the FOMC. Ned Gramlich, the school’s first dean, served as a governor on the Federal Reserve Board from 1997 to 2005 and played a central role in laying the groundwork for the close ties between the school and the Federal Reserve system.

“Ned, together with Paul Courant, were very much part of making sure that on the economics side there was always a very tight connection between policy and the underlying economic theory that we teach,” says Kathryn Dominguez, professor of public policy and economics.

“In the early years when I arrived, every student took macro voluntarily,” she recalls, “partly because Ned taught it—and he was a master teacher—but also because they were convinced that it would make no sense to get that degree unless they had that knowledge.”

Gramlich’s policy work and his classes inspired a generation of students. One of them was Daniel Sichel (MPP ’83), who would go on to serve over 20 years at the Federal Reserve Board, in a career that ranged from business investment analyst, to inflation forecaster, to coordinating the U.S. economic forecast, and, eventually, becoming part of the senior management team providing analytic support to the Board and the FOMC.

“Ned was a crucially important mentor and guide for me,” says Sichel, who is the Stanford Calderwood Professor of Economics at Wellesley College. Although Sichel had an undergraduate degree in economics, it was at the Ford School (IPPS at the time) where his serious interest in economics developed. As Gramlich’s teaching and research assistant, Sichel had the opportunity to do a fair amount of work with and for Gramlich. He found the work fascinating and clearly remembers a conversation with Gramlich that helped steer him towards a PhD in economics over his original intention of going to law school.

Almost two decades later he would come full circle. Sichel worked extensively with his mentor when then Fed Chair Alan Greenspan designated Gramlich to lead the Air Transportation Stabilization Board and Sichel became the economist who staffed him on the loan guarantee program set up by Congress after 9/11.

Susan McLaughlin (MPP/MBA ’93), currently Head of Treasury Debt Financing and Emergency Lending Programs at the New York Fed, also shifted course after taking an economics class in her first year of studies at the Ford School. Intending to focus on environmental policy, she instead found financial markets so interesting that she shifted to economic policy and decided to pursue an MBA in finance at the same time.

After graduation she was hired by the New York Fed and soon joined the Markets Group. For decades, she has been at the epicenter of efforts to steer, manage, and contain the fallout of crises. During the Global Financial Crisis, she served as head of the discount window—which provides backstop funding to banks in normal times, and is the way that emergency lending operations are operationalized in a crisis—and contributed to the formulation and execution of various emergency lending operations.

Even in the early days of her career at the Fed, when she worked as a trader-analyst on the foreign exchange (FX), foreign reserves, and U.S. Treasury trading desks, McLaughlin conducted market analyses and briefings that fed into the information flow from the Desk to FOMC policymakers.

“The Desk in New York is the eyes and ears of the Fed. From when Asia closes and Europe opens through the end of the New York trading day, we are closely monitoring market developments and price movements in global financial markets in real-time, and talking to market participants from both the buy-and sell-sides of the market, to discern what changes in asset prices and relationships are telling us about how policy expectations are evolving and where financial stability risks may be brewing,” she said.

Every day, trader-analysts at the New York Fed conduct a series of verbal and written briefings to keep policymakers informed before the next FOMC meeting. “When Ned Gramlich was a Governor he read these pieces,” McLaughlin says. Just as Barr and Collins are now doing.

Dominguez, who is on the Economic Advisory Panel of the New York Fed, also contributes to policymaking. She is in a group of 10-15 academics and macro forecasters who convene twice a year. They brief the bank’s president on topics such as inflation, supply chain issues, the strength of the labor market, or whatever might be at the heart of policymaking at that moment. “The Fed presidents take this as a brainstorming session that would provide views outside of the Fed and the breadth of academic opinion on a topic,” says Dominguez. In addition, she is often called on to discuss issues regarding exchange rates or the strength of the dollar.

In turn, the close connection to macro policymaking feeds into Dominguez’ teaching. “My experience at central banks very much informs the kinds of topics that we cover in my classes,” says Dominguez, who has been a visiting scholar at a number of central banks beyond the Fed, including the European Central Bank, the Swiss National Bank, the Reserve Bank of Australia, and the Bank of Italy, among others.

The Fed’s so-called “dot plot” offers a small example. All the members of the FOMC provide their forecasts of where interest rates will be in the future, and the result is a published chart where each member’s forecast appears as an anonymous dot. Fed watchers spend a lot of time trying to figure out whose dot was which and what it means.

Although Dominguez’ classes include a multitude of graphs and charts, the dot plot was not one of them. But when Dominguez was nominated by President Obama in 2015 to the Board of Governors, one of her former students who was serving at the New York Fed gave a guest lecture in her class and wondered in jest where Dominguez would place dots on a plot. “I realized it was a great way to explain why people are so interested in what the FOMC is doing and that actually changed my teaching,” says Dominguez.

This year, Wall Street and Dominguez’ students might well be pondering which dots belong to former Ford School deans. 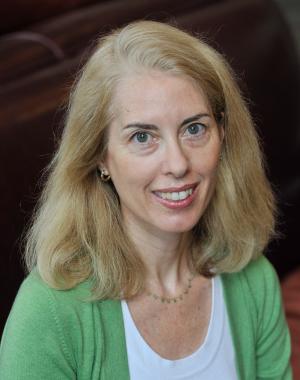 Professor of Public Policy and Economics; PhD Program Director
Dominguez is the director of the Ford School’s doctoral programs. Her research focuses on topics in international financial markets and macroeconomics. A research associate at the NBER, she is also a member of the Panel of Economic Advisers at CBO, the Advisory Scientific Committee of the ESRB, and the Economic Advisory Panel of the New York Fed.
Share: