Join us on Tuesday, September 6 for a very special film screening, free food, and the chance to meet your fellow students, faculty, and staff as we learn about the legacy of our namesake president, Gerald R. Ford.

8:00 pm - Q&A with former ambassador Peter Secchia, producer of the film and one of President Ford's close friends

President Ford's friend and colleague Ambassador Peter Secchia will introduce a new, one-hour film that he produced and which aired on National Geographic earlier this summer.

The film, narrated by Michigan's own Jeff Daniels, is called Gerald R. Ford: A Test of Character, and it features in-depth interviews with major figures from the period, including Tom Brokaw and Dan Rather, who covered the Ford presidency as young reporters; Ford’s cabinet members and staff including Dick Cheney, Henry Kissinger, and Donald Rumsfeld; two of Ford’s children, Steven and Susan; and the historian, Richard Norton-Smith, among many others.

Ambassador Secchia will then take your questions in a very special, off-the-record Q&A.

Don't miss this all-school kick-off to the new school year.

Read the Washington Post article about the new documentary. 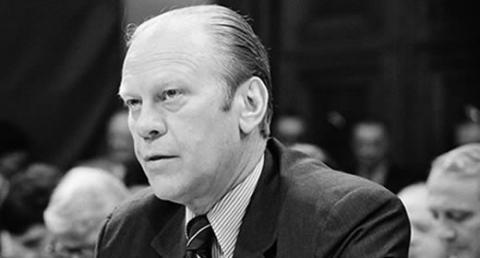