The David Bohnett Foundation Leadership and Public Service Fellowship, launched in 2010 with a gift from the foundation of U-M alumnus David Bohnett (MBA ’80), is a competitive award that enables Ford School students to apply their policy training to benefit the people and government of the City of Detroit.

Over the past five years, Bohnett Fellows have contributed to a wide variety of public service improvements in the city, including the expansion of curbside recycling, the improvement of public lighting, the development of plans to streamline the small business application process, and more.

We are delighted to announce the next round of Bohnett Fellows, who will serve the City of Detroit Mayor’s Office in the summer of 2017.

Abess Makki, a first-generation high school and college graduate whose family hails from Sierra Leone, earned his bachelor’s in nutrition and food science at Wayne State University in 2014. Since graduation, he participated in the Summer Venture and Management Program at Harvard Business School and in a TechTown Detroit business incubation program for college students and recent graduates aspiring to launch technology startups. He is founder and CEO of CityInsight, LLC, which builds agile mobile applications for municipal governments to better communicate with their constituents and streamline their own operations. CityInsight’s first product, CityWater™, empowers residents of Detroit to track their water usage on a daily basis. As a student at Wayne State, he was president and co-founder of the National Student Water Association, which built a gravity water system for 100 homes in El Retiro, Honduras. His policy areas of interest include social entrepreneurism and information and technology management.

Mary Naoum is pursuing a dual-master’s degree in social work and public policy at the University of Michigan. As an undergraduate at the U-M School of Music, Theatre & Dance, Mary focused her studies on arts for social change, dedicating her time to community arts empowerment initiatives in Detroit and facilitating arts workshops in various youth and adult detention centers in southeast Michigan. Before starting her graduate studies, she served as the southeast Michigan outreach coordinator for the Citizen’s Alliance on Prisons and Public Spending, coordinating educational events in Detroit and surrounding communities. As a social work intern for State Representative Stephanie Chang’s (a former Bohnett Fellow) district service center, Mary developed and facilitated a political leadership program to inspire high school girls of color to pursue careers in civic engagement and public office. Her professional interests include youth development, criminal justice reform, and policymaking for equitable community development.

Mariah Van Ermen earned a bachelor’s degree from the University of Michigan in international studies and Spanish, with a focus on global environment and health. After graduation, she served as an AmeriCorps member at the Public Health Institute of Metropolitan Chicago. She worked to foster healthy food environments by coordinating nutrition education, healthy food access, and food waste reduction efforts for the Chicago public school system. Since 2014, she has worked as a wellness policy specialist at the third largest school district in the nation, Chicago Public Schools. For Chicago's nearly 400,000 public school students, Mariah developed and launched the district's Farm to School program, established two school-based farmers markets, increased summer meal participation, and coordinated accountability for district-wide student health and wellness policies. She has also served as a consultant with FarmLogix, winning a USDA grant to promote local food system technology. Her policy areas of interest include ethical food systems, sustainable food production methods, and urban agriculture. She looks forward to embracing her Michigan roots and learning from the people and city of Detroit.

David Bohnett is a University of Michigan alumnus (MBA '80) and entrepreneur. The foundation that bears his name is committed to improving society through social activism. Read more about David Bohnett in the State & Hill feature, "To the City and the World." 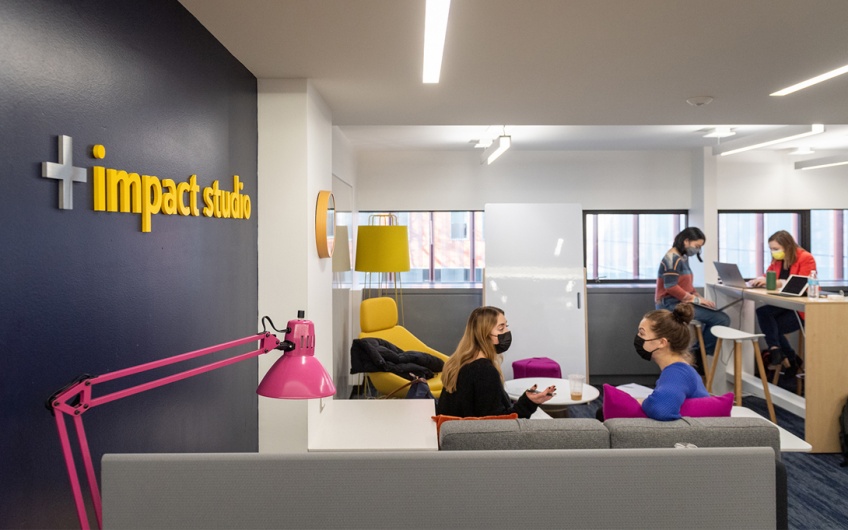