“When the nights are long and you need a little motivation, remember the small victories. These victories are examples of how you’re making a difference no matter what career you’ve chosen.” 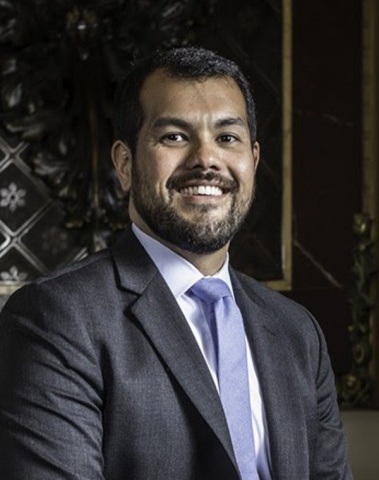 MPP, 2006
Chief of Staff, Office of the Under Secretary of Defense (Comptroller)
LinkedIn
Location: Washington, DC

Farouk Ophaso was honored by the Public Policy & International Affairs Program (PPIA)—a program designed to build diversity in public service—as one of their 40 Changemakers to mark their 40th anniversary. The University of Michigan’s Gerald R. Ford School of Public Policy has proudly supported the PPIA fellowship (formerly known as the Sloan or Woodrow Wilson fellowship) since its inception in 1981 and has been one of just a handful of policy schools to host the educational initiative every summer.

Farouk Ophaso embodies the values of confidence, patience, and attention to detail.

Ophaso is the first in his family to pursue a career in public service. He was not sure it would be an attainable goal until his participation in the University of Michigan’s Junior Summer Institute at the Public Policy and International Affairs (PPIA) program. Here, he gained the confidence to tackle the quantitative classes that he avoided as an undergraduate at the University of California-Berkeley.

Four years later, after graduating with his MPP from the University of Michigan’s Gerald R. Ford School of Public Policy and becoming a Presidential Management and PPIA Fellow, he began his important work of ensuring that the federal budget aligns with our national security and other public policy goals.

Ophaso’s career in public service began in the U.S. Department of Defense, and he later went on to work in senior roles at the White House, the U.S. Senate, and the U.S. House Committee on Appropriations.

“I view public servants as those who work every day to protect our country from foreign threats, make sure our roads, railways, and airways are maintained and safe, ensure we have clean air and water, provide aid to foreign countries that need it, deliver services to the poor and elderly, and a multitude of other things that keep our country competitive, prosperous, and free,” Ophaso said.

As part of the LGBTQ community and the son of refugees from Laos, Farouk never thought working at the White House was a possibility. However, because of his extended experience there, he now knows firsthand that the opportunity to work at the White House is open to every American.

Many members of the LGBTQ community still face job insecurity and discrimination in the workplace. Farouk is a testament to others within this community, proving that whatever career they desire is possible. He advocates for efforts to overcome the many challenges that members of minority groups seeking to play a greater role in public service still face, particularly for careers in national security.

“We celebrate you, Farouk Ophaso, for providing responsible advice and counsel that supports the citizens of the United States,” PPIA said about Ophaso. “Your work is both honorable and valuable and the time and experience that you generously share on behalf of the greater good does not go unnoticed. By setting your sights high and seeking to challenge your belief systems, you are a role model for many. Thank you for your attention to the small details that make the big picture work.”

This feature was written by Simone Gbolo of PPIA and revised by Olivia Bradish (BA '23) for this platform.